“The problems with Novopay have affected public trust and confidence in the Ministry of Education and also the wider public sector.”                  Novopay Report

Apart from those numerically numinous teachers who like an activity-based approach to the study of statistics and probability, Novopay’s game of unders and overs has been very annoying, especially for many of their colleagues. But it’s time to come in spinner and get some perspective.

So far the Novopay system has cost $24 million more than expected, though the blowout was likely to increase even further. But on the political Richter scale it is a mere 3.4 compared to an INCIS 9.1

INCIS was the name of the Integrated National Crime Information System designed to provide information to the New Zealand Police in the 1990s, but which was abandoned in 1999. By then it wasn’t integrated, it wasn’t national and it certainly wasn’t a system providing much timely information, but it really raised the bar in being a criminal waste of taxpayers’ money. By some estimates NZD$110 million swirled down the INCIS gurgler in the 1990s. Though the project was abandoned, parts of its hardware and software infrastructure are still in use today.

At least Novopay lumbered into flight, if somewhat prematurely. Post-Report it is no dead duck, despite the guns being pointed collectively skyward from early May with people waiting for a different kind of report. There was plenty of ducking for cover.  Not getting all the ducks in a row in the first place was the big problem, as the Novopay Report makes clear. 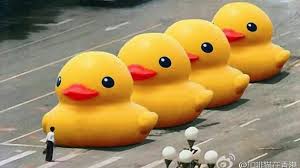 There is a web-footed welcome to the finished product: “Welcome to the Ministerial Inquiry into Novopay website. The Minister responsible for Novopay, the Hon. Steven Joyce established the inquiry to address the issues and concerns surrounding Novopay – the education payroll system.”

Joyce is, of course,  the Minister responsible for the Novopay mop-up, not the cock-up. The role of the Ministerial Inquiry was to conduct a fact-finding investigation into Novopay from the outset to the present day and was led by the Lead Inquirers, Mr Murray Jack and Sir Maarten Wevers, to the accompaniment of Goodnight, Irene.*

The inquiry found Talent2, the Australian contractor tasked with implementing the system, has been swamped with technical difficulties which built up a tsunami of compounding errors. This was not entirely news: “The impacts of the well-publicised Novopay failures have reverberated across New Zealand”  for months. Those at the whiteboard face have not been backward in forwarding their error ridden payslips to the media*.

It has all very annoying and very time-wasting, but it is not quite in the league of, say, formerly Solid-as coalminers being wrenched from the coalface by sudden redundancy.

Just after the report was released Anne Jackson Ministry of Education Deputy Secretary (tertiary, international and system performance)  chose walking over planking by responsibly tendering her resignation. She said the decision to resign was hers alone and that there was no pressure put on her to quit. “I remain deeply committed to education and the principles of public service. That is why I have taken this step today…” A colleague followed last Friday. In fact there have already been three major MoE resignations, counting Secretary of Education Lesley Lonsgtone, though that was not solely Novopay inspired, nor pressure free.

Other colleagues will be squirming. Even if they weren’t trying to string along their political masters and mistresses, it does seem that the advice proffered to ministers was, to coin a phrase, ropey. Some advisers obviously gave themselves more than enough rope.

Unsurprisingly, responsible ministers of all persuasions since the Novopay behemoth lurched out of the laboratory were not fingered; it was all down to dodgy advice, the biggest sin for any public servant.

The class action by the Post Primary Teachers’ Association on behalf of 18,000 members against Ministry of Education acting secretary Peter Hughes is a further waste of time and resources which should never have been started. In the wake of the latest resignations, it should be abandoned forthwith.

The Association is fighting to have a statutory declaration from the court that Hughes, who has only been in the acting role a few months,  has breached his Education Act obligations to pay school staff.  The union said it wants the ministry to shoulder the blame for the fiasco. Vampire movies are inexplicably still popular, but how much blood is enough?

Perhaps it’s really a classic class warfare action ahead of next year’s general election.  On a National Radio  item on Novopay PPTA president Angela Roberts talked about “the workers” as if she’d forgotten who she was representing. “Education professionals” and “support staff” would have sounded better.

It really is time for a bit of perspective. Frustrating though the Novopay saga has been it is not payola. There has been some accountability, with at least two out for the count, even if the lighthouse keeper’s role of the State Services Commission hasn’t really been  put under the spotlight.

It is a fact that one teacher’s bungled pay slip was just 1c.  But alongside people facing the challenge of school closures and mergers, or those suffering genuine hardship in Christchurch because of EQC and/or insurance battles, these indubitably annoying errors pale into insignificance, especially given that many schools made temporary arrangements for those whose pay was cocked up. They should be compensated for wasted administration time, but litigation is a different matter.

The biggest issue is why in the first place the Ministry looked off-shore for a tweaked, out of the box system when clever Kiwi IT and payroll firms could have delivered the goods in a more timely and user-friendly fashion.

That’s not to say there would have been any teething problems, both system and training, which is par for the course in any large change like this which shifts a largely manual system onto an integrated digital platform. All IT systems would be absolutely fine if it weren’t for the users. But at least the support would have been at hand and the chosen IT partner better vetted.

When she resigned Anne Jackson’s role was the development of strategic direction for the education system, including links with economic policy, skills and innovation. It’s a pity that MoE didn’t activate those links closer to home. As I said in an earlier Novopay blogpost* we have talent too.

Give Kiwi skills and innovation a chance!